About the Author and Editor 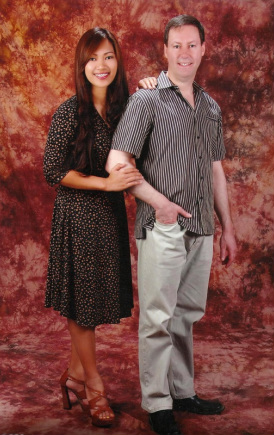 Mr. and Mrs. Gaetan Robichaud
My wife and I made this website for the glory of God. We praise Him because of His great love for the mankind, shown by sending His Son-- the Lord Jesus Christ--to redeem us.

We have decided to do this website because of the many confusions out there in this world. We are trying, with honest intentions, to bring the light to denominations which are indoctrinated by Bible colleges and false pastors, and to help believers to have complete and accurate knowledge of the New Covenant. We are backing up every detail in this website with the scriptures, and we sincerely believe that what we say is true all based on what is written.

May the Lord guide you with an honest spirit to discover the Truth that we possess so that you can rejoice with us with a full liberty that we have in Christ! Remember, salvation is the beginning of our Christian lives, not the END!

Ephesians 4:13, "This will continue until we all come to such unity in our faith and knowledge of God's Son that we will be mature in the Lord, measuring up to the full and complete standard of Christ."

How I Got Saved

Back when I was twenty one years old, one of my friends named Claude Paquet converted into a new religion. We were both Catholic before and took karate classes together. The same time he went out of the Catholic organization, he also stepped out of our karate classes. Other friends and I started wondering what happened to him. But we've known him as somebody who believes in science fictions and supernatural stuff. So we thought maybe it was just one of his ideas that came out from his diligent study in school.

Not long after, Claude dropped by my work trying to make me interested about this new religious belief he was into. I remember him mentioning about the book of Revelations. I could not grasp what he was saying. It was just above my head!

Later, I met Liette Boucher, a girl who was working at the Chuckwagon Fast Food and Take Out restaurant. I went there to take a meal but I got something else. She invited me to attend a gospel meeting with her. I did not refuse the invitation to be polite. But I did not have any intention to go to such a meeting. Maybe she knew I was not going, because, to my surprise, she came to my apartment with her mother and Claude! I was cornered! Now, I had no choice but to go with them to the gospel meeting. And for the first time in my life, I heard the gospel preached.

I looked at the people around me during the meeting, but I did not understand the message proclaimed that evening. Afterwards, Liette and her mother invited me to their home. For about an hour, Liette poured questions on me about heaven, hell, death, etc., which I did not have any answer  to any of them. Her mother told her to slow down but she insisted that I should realize my bad position in front of God. I just let her talk to me and I listened carefully. But in my mind, I thought what kind of people are they? Are they crazy?! They were surely very different!

I left their place and drove to my mother's place to spend the night there. But the conversation I had with Liette and her mother got stuck in my mind. I was bothered because they could say they were saved and were going to heaven. But I could not say the same thing. At my mother's house, before going to bed, I knelt down and prayed to God. I told Him that if what Liette had said was true, I don't want to go to hell. I wanted to go to heaven! I went to bed and I did not feel anything happen.

The next morning, I had to go to Moncton. I had to leave my car so my mother gave me a lift. I did not want her to drive all the way to the city so I asked her to drop me along the road and I would hitch a ride. It was very quiet while I was waiting on the road. There were no vehicles passing by. Suddenly, a voice inside told me "JESUS DIED FOR YOU". I felt like as if I was waiting for salvation for so long... like I was very thirsty and suddenly someone gave me a glass of water! I felt the burden lifted away from me. And I could look up the sky with joy that he created all these things knowing that someone like me is going to His heavenly kingdom! In my heart, I acknowledged Him as my personal Savior.

I often said when I was in the Catholic organization that Jesus died for US, but I never took it for ME. For a long time, I did not realize that I was lost even though I know that the world is not a friendly place to be in with all the wars, violence, etc. I never had any satisfying answers for all my questions before. But now it's different. I am saved. I know where I am going. My heart was satisfied to know that!