The Levitical system had its weaknesses and unprofitableness. It was limited with regards to sacrifices, mediation and forgiveness of sins, and contact and communication with God.

Hebrews 7 shows a transfer of order and the priesthood from Aaron's (through the tribe of Levi) to Judah's in the person of the Lord Jesus who received God's promise of being the High Priest forever. Not only He is the permanent High Priest for all believers, He is also the perfect One pushing away the limitations of the Levitical system, giving a better and complete sacrifice (Himself) which was done once and for all, and presenting a better covenant (testament) between God and His people (the Assembly).

The following illustration shows the transfer of priesthood to another order (from Aaron's to Judah's order). 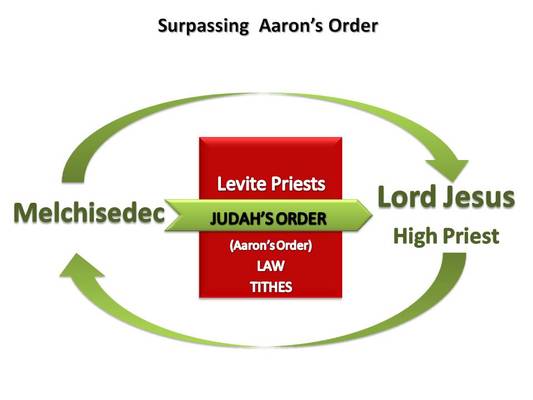 The book of Hebrews was written by a Hebrew to other Hebrews to stop them from slipping back into the rites and rituals of Judaism. Many of the early Jewish believers sought and tried to escape the mounting persecution ahead of them. This letter, then, is an exhortation for the persecuted believers to continue in the grace of Jesus Christ, the High Priest for all believers.

The denominations are using the Levitical system to gain money for their so called pastors' salary and building mega structures for themselves. With this, the founders of every denomination are becoming rich. Likewise, they put guilt on the believers by using the teachings of the book of Malachi that if you don't give 10%, you are robbing God and will be cursed. But mature believers know the context of the book of Malachi. In Malachi 1:1 it says, "The word of the Lord to Israel through Malachi", the prophet was addressing to Israel and not to the Assembly (Church) . And in Malachi 3:8 says, "'How do we rob you?' 'In tithes and offerings.'" If the religious Jewish will not strictly perform their 10% giving, according to the law, they are cursed, verse 9 "You are under a curse--the whole nation (Israel) of you..." Here, we can see the direct manipulation of denominations' so called pastors, robbing the believers (Christians) and putting them under a curse if they don't give their tithes. It is a subtle way to put a guilt trip on the conscience of the believers and at the same time to make the believers think that they (the pastors) are the only ones "anointed" like Moses was for his Jewish people in the Old Testament. According to the New Covenant, there is no such a thing as a pastor-leader receiving salary from the 10 %. It is purely evil to use the Old Testament law for self gain. Furthermore, they are using the Old Testament authority to elevate themselves as the "anointed ones" as in 1 Chronicles 16:22 and Psalms 105:15 which is out of context and is purely nonsense. We don't live in the past. We live in the present, and the present is the New Covenant Assembly which is disconnected and has nothing to do with that (tithes).